Eleven into Fifteen: a 130701 Compilation 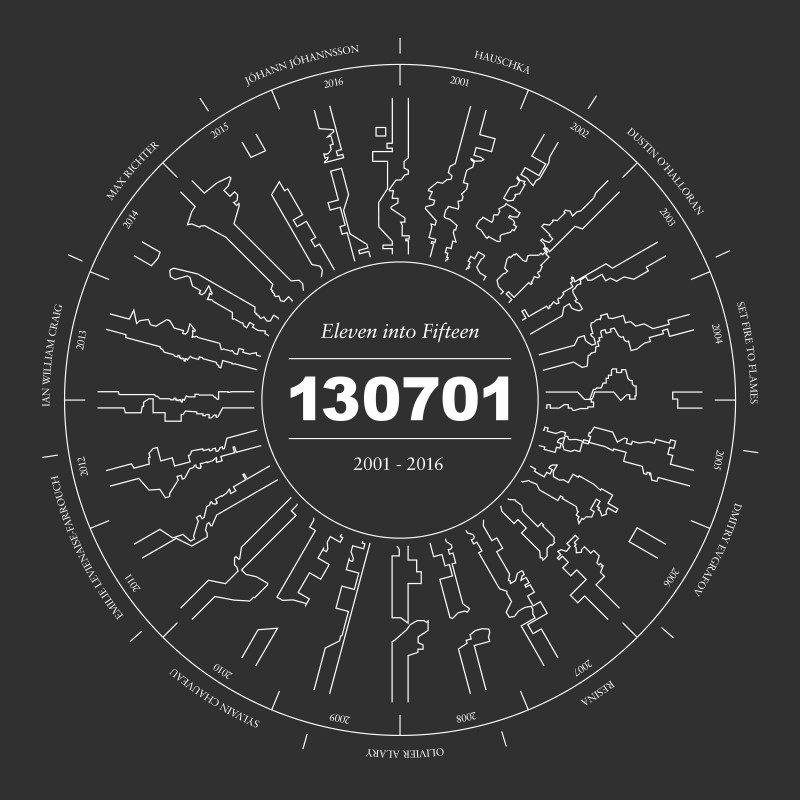 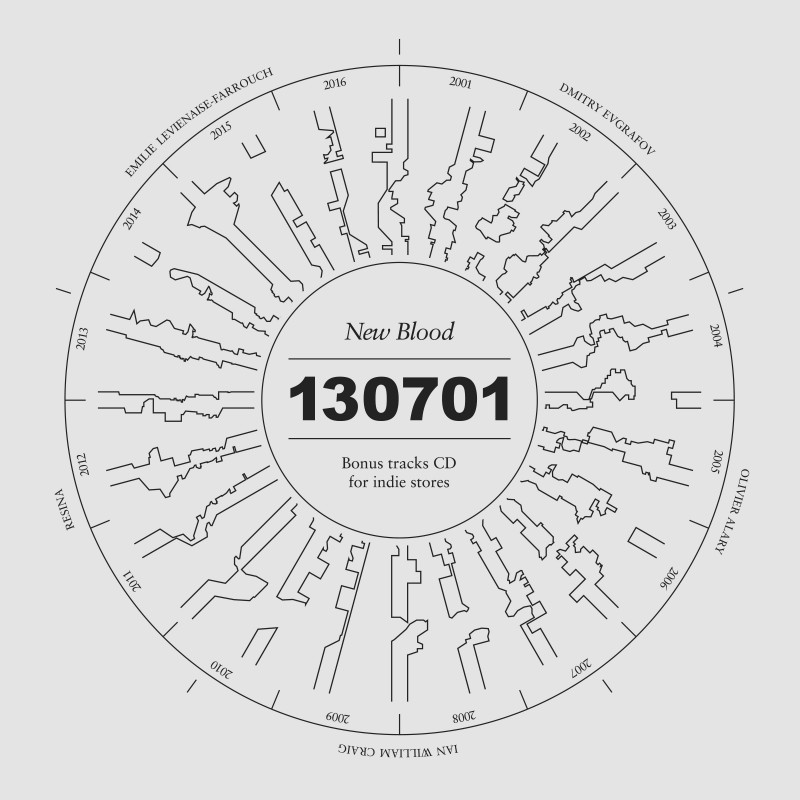 FatCat Records’ 130701 imprint has played a pioneering role in the development of today’s vibrant post-classical scene. It has introduced the likes of Max Richter, Hauschka, and Set Fire To Flames, and has been home to Sylvain Chauveau, Jóhann Jóhannsson, and Dustin O’Halloran. With its fifteenth anniversary approaching on 13th July 2016, 130701 is celebrating with the release of a compilation featuring eleven exclusive tracks - one from each of the artists to have graced the roster over the past fifteen years, plus three new signings - Ian William Craig, Olivier Alary and Resina - whose first 130701 albums are each set to appear this year. Curated and compiled by 130701’s David Howell, none of these tracks has previously seen a physical release.

Opening with the sumptuous textural shimmer of Olivier Alary’s ‘Yangtze’, the album moves through the poignant, prepared-piano and string sweep of Dustin O’Halloran’s ‘Constreaux No. 2’ and the wobbly solo piano lyricism of Dmitry Evgrafov’s ‘Anthem’ before taking a somewhat darker, more intense turn on Set Fire To Flames epic ‘Barn Levitate’. A ten-minute track featuring members of Godspeed You Black Emperor!, Fly Pan Am, and others from the hyper-creative Montreal community of the early ‘00s, it is the first new SFTF material to appear since their sophomore album ‘Telegraphs In Negative’ came out way back in 2003. Another new signing, Polish cellist/ composer Resina’s track ‘June’ follows organically on from here, her solo cello swelling and slowly flowering through the frost.

Hauschka’s ‘Quiet’ dates from the Ferndorf’ album period (2008) and sees the German artist paring down to just his trademark prepared piano on this beautifully lyrical little track. French artists Sylvain Chauveau and Emile Levienaise-Farrouch are paired beside one another - the former’s ‘NB’ follows on in a shimmer of suspended guitar delay before Levienaise-Farrouch’s ‘Alethia’ dances through an echoing web of piano.

Max Richter, who released five albums with 130701 between 2004 and 2012, contributes the wonderfully unravelling ‘Bach Study’, whose decay-shroud is echoed in Canadian Ian William Craig’s too-brief gem, ‘Tender Fire’ – Craig’s classically trained vocal layered and processed through his customised tape to tape decks. The album ends on a stellar live recording of Jóhann Jóhannsson’s ‘They Being Dead Yet Speaketh’ (from ‘The Miners’ Hymns’ project), recorded with the Wordless Music Orchestra, conducted by Gudni Franzson for New York Public Radio at the World Financial Center Wintergarden, NYC, 31st January 2012. A glowering, stunningly executed 12-minute piece, it feels like a suitably epic way to bring down the curtain on acompilation celabrating a wonderful first 15 years for the label.

Following nearly three years of silence, 130701 was reactivated at the end of 2015, with a number of new releases and signings lined ahead of this year’s fifteenth anniversary. A new website and social networks have recently been unveiled, as well as a May 10th showcase at The Brighton Festival.

Having begun life on 13th July 2001 (hence the label’s superficially cryptic name), the pioneering 130701 imprint was surely well ahead of the curve, becoming what Drowned In Sound called “something of a blueprint outlet for instrumental based musicians worldwide whose creations don’t quite fit safely into any genre or roster.” Growing to encompass a hugely influential, high quality stable of artists operating at the cutting edge of the modern classical genre, 130701 has come to embody incredibly graceful and evocative music with a serious sense of purpose and a huge emotional weight.

Initially established as an outlet for Montreal-based Set Fire To Flames (a 13-piece collective featuring members of Godspeed you black emperor!, Fly Pan Am, etc), the label has been home to some of the most recognisable names in the broad-reaching post-classical field, having introduced the likes of Max Richter and Hauschka, as well as becoming a home for pianist / composers Dustin O’Halloran, Sylvain Chauveau, and recent Golden Globe winner / double Oscar nominee Jóhann Jóhannsson.
With a sound and identity that is both eclectic yet coherently unified over the course of our release history, 130701 may not have been prolific but has rigorously maintained a seriously high quality control bar from the outset and, as No Ripcord wrote, “has released some of the most important records of the last decade and single-handedly defined the post-classical genre.”